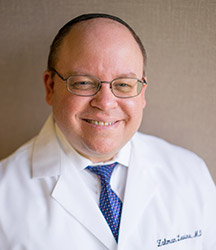 Dr. Zalman Levine, Co-Director of our Institute, is a Board-certified specialist in Reproductive Endocrinology and Infertility (REI). His clinical expertise encompasses all areas of assisted reproduction including ovulation induction, intrauterine insemination (IUI), in vitro fertilization (IVF), preimplantation genetic testing (PGD and PGS), and oocyte cryopreservation (egg freezing) for fertility preservation. Dr. Levine was recruited by the Fertility Institute in 2002 to provide our patients with the most advanced reproductive technologies. Prior to joining our team, he served as Clinical and Research Fellow at Harvard University alongside prominent leaders in the REI field, teaching reproductive medicine and surgery at Harvard Medical School and at the Brigham and Women’s Hospital in Boston. He has performed pioneering research, presented at national conferences, published in the medical literature, and received many academic awards for his research, teaching, and surgical skill. Before beginning his medical career, Dr. Levine studied at Yeshiva University’s theological seminary and is an ordained rabbi who lectures widely on the interface between assisted reproduction and religion. Dr. Levine has been recognized by patients and colleagues for his caring and warmth, clinical innovation, attention to detail, ability to explain and communicate medical concepts in an understandable and sensitive way, and success in helping people become parents.

Through his years of educational and professional experience, Dr. Levine has developed a depth of knowledge and expertise in all aspects of reproductive endocrinology, as well as a deeply personal humanitarian approach to his patients. His experience includes: